Their mother sometimes travels for work. When she does, this means our usual division of time with the children is interrupted, and I get them for a whole week or two. As of this posting, it’s been about a week and a half I’ve had them without any real interruption.

Most folks exhibit extraordinary sympathy when they hear that I’ve got the kids on my own for two weeks. They ask: Oh, how do you do it? This, of course, is a question for which there is no real answer, because being a dad on your own is something you just do. You do it, and you do it well. After all, what does it mean to not do it? I don’t really know, but the thought is terrifying. Shackling the kids in a dungeon, feeding them slop in a bucket, not allowing them in the sunlight for days at a time.

Though I appreciate their concern and sentiment of friends and family who ask how I do it, the question misses the point a little bit. I love spending time with my kids. I love my nights with them. Their mom and I have a 50/50 split deal, so my school nights with them are full of cooking them meals, reading books, helping with homework, and watching movies and TV shows they like. (This is made all the better around the holiday season. We will watch every great old Christmas movie ever made. Emmy recently bought the original 1947 ‘Miracle on 34th Street‘, a Christmas-themed tour-de-force that is more of a legal thriller than you may remember. Less fortunately, Finn chose the live-action ‘How the Grinch Stole Christmas,’ a radioactive cesspool of a movie that causes one to contemplate how Ron Howard and Jim Carry could perpetrate such a cinematic crime against humanity.)

A big part of having the kids around is feeding them. Most nights I try to cook healthy meals for them, complete with vegetables and fresh fruit. Sometimes I hit a home run — pasta is usually a winner, tacos always work, chicken and veggies. Sometimes it’s a miss. I made a great black bean soup the other night, and the kids just weren’t down with it.

But it is a sad reality that I can’t always cook healthy meals they love. Because I’m not great at it and am still learning a lot of the basics, cooking takes me longer than those who are great cooks. I get the kids home around six, that means cooking for 30 to 45 minutes, and that means dinner is around seven o’clock. That means an hour to eat, clean up, brush teeth, get on jammies, and read our books. If there’s homework to do (or, these days, presents to wrap), there goes even more time.

So sure, sometimes we go out to dinner because I’m tired, they’re tired, and it’s just easier. And depending on where we go, it can be a little bit of a time saver.

There is a Church’s Chicken not far from our house. Finn called it “the chicken place with the star” (check out their logo and you’ll figure it out). Though we do usually go out to eat a couple of times a week, I try to avoid fast food. There are a lot of great places to eat in St. Pete and Gulfport, so avoiding fast food chains isn’t a heavy lift.

But Finn was persistent. And once he had Emmy on his side, it was all over for me.

Look, chicken fingers and mac-n-cheese are staples for these two. I figured they’d like the offering from Church’s okay, but I wasn’t expecting it to become their favorite place. 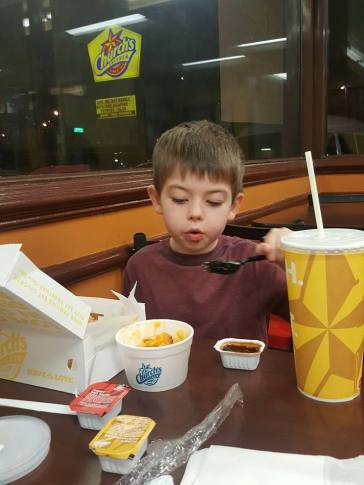 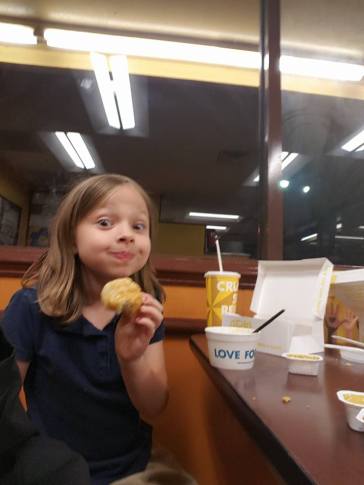 Emeline scarfed her mac-n-cheese side down like a whirlwind. Finn ate fried finger after scrumptious chicken finger. Their little faces at the end were covered in barbecue sauce and grease, half-smiling in a food-coma joy.

And now Church’s Chicken will have to be a regular place on our fast-food rotation (the only other real fast-food place we ever go is Wendy’s, and that’s pretty rare).

I am still going to cook them my own fried chicken, which, for the record, I think is better than Church’s. But when we’re out and about, and it’s late, and we’re tired, and we just want some good chicken, a few bites of mac-n-cheese, we’ll stop at Church’s. You can count on it.

I love these kids more than anything. In the end, it’s not about the food, as much as I want them to have adventurous palates (and, hey, Church’s is its own adventure, really), it’s about being with them, spending time. Whether we’re eating fast-food chicken or not, they deserve the best I can give them.