The Last King of Siam 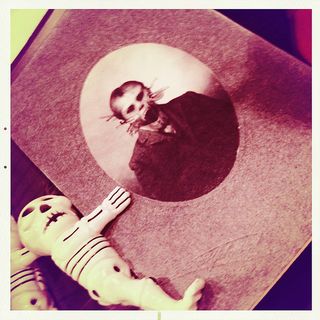 The drive from San Francisco to Florida had been long, hot, expensive, and not without consequences.  He had encountered them every step of the way, each more dangerous than the last.  Los Angeles.  Phoenix and Tucson.  Las Cruces and Juarez.  Some nowhere stretch of Texas and Beaumont.  New Orleans, Mobile, Pensacola.  Tallahassee.  Ocala.

Sitting in the seat of the big Cadillac, he clicked the freshly loaded clip back into the Beretta and checked the safety, slid it comfortably back into the holster, like a hand going into a waiting pocket.  He was glad the running was over, glad that he would be able to ask for the bonus without any guilt this time.

It was in his contract.  Any unforeseen contingencies he had to deal with in the execution of his duties as a procurement specialist and courier, and he got a significant bonus.  The string of bodies he’d left across the country definitely counted as contingencies.

He didn’t understand the fuss.  It was a goddam picture.  Creepy, yes.  Gross, yes.  But in the end, just a picture.

A boy, disfigured.  The lower half of his jaw was simply missing, and it looked like tendrils growing out of his head, which itself was – if you looked closely, as he had – itself misshapen.

The clients hadn’t told him not to look at the picture.  In fact, they told him how he’d know it was real. He’d found it in the hotel room of a writer, who had purchased it at an antique store.  Seven hours later, they came out of the woodwork.  He didn’t know how they knew he had it, or how they didn’t get it first.

The four dead goons in the Buick wouldn’t draw attention for a little while, anyway.  He was in the parking deck by the hotel.  A little sweaty, but he didn’t have any cleaning up to do on this one – not like Beaumont where the fuckers had jumped him and managed to stab his arm with a four inch surgical steel blade.  He’d made those bastards pay real good.

He felt compelled to look at the picture one more time.

A string of bodies across the country, and this is what bothered him?  Even way back then, how could this possibly be?

He had access to the Internet, for God’s sakes – he knew what was wrong with the guy.  Human Papillomavirus – what they call HPV.  Actually not that hard to get, and if you have a certain genetic mutation, you got these warts that are virtually unstoppable and they start to look like tree roots.  There’s a guy in Indonesia today whose hands and feet are covered in what look like roots – just warts that never stop growing.  And all he’d done is skin his knee.

He figured there was something else, because the kid clearly didn’t have a jaw.  Maybe that was part of the HPV deal.

None of it explained why someone had sent a virtual army after him to find the photo.

In the room were four more like the ones he’d left across the country.  Asian, clean-cut, sharp.  These guys were different, though.  These guys were bigger, meatier.  They held themselves slightly forward, he noticed their hands placed just right to draw their weapons – he knew there would be guns underneath the jackets.  The big men were spaced well, too.  One by the door, one near the bathroom on the far side, one by the kitchenette, one near the big table by the window, virtually surrounding him.

Two more men who had been seated at the table stood and seemed to bow ever so slightly to him.

“Mr. Hudson, you have arrived,” the older of the two men spoke. “You have what we requested?”

“Yes,” and as he reached into the inside pocket of his jacket he was careful to go in with his thumb and forefinger clasped – he didn’t want the big men to get jumpy.  No guns.

He held the black matte holding the grotesque photo very delicately, just the edges of his fingers, and slowly approached the men at the table.  They waited very patiently, their hands clasped in front of them, as he took his time crossing the room.

He handed it to the older man, who took it as gently as he held it.  The man examined it, very briefly, and said something in a language the man didn’t understand – Thai, maybe? – and then looked at him.

“You have succeeded, Mr. Hudson, and for this we thank you,” followed by another barely perceptible bow. “We will meet our obligation to you.” The man said something else in what he would finally just decide was Thai, and the ox in the kitchen bent down and stood back up with a briefcase in his hands, crossed the room and handed it to him.  It was very heavy.

He had a personal policy not to count the money on site – never mind what the movies said.  It offended the clients and usually ended in some kind of misunderstanding.  If there was a bomb in the briefcase, or some other disaster, he had ways of figuring that out before opening the damn thing.  No one had ever tried to blow him up, though someone had once put a canebrake in a bag that was supposed to have a considerable amount of cash in it.  The goddam snake rattled, and both the snake and the immediate ex-client ended up having a very bad day.

He also had a policy not to ask the client about whatever it was he procured and delivered.  He could feel himself preparing to violate that policy for the first time in his life when the door to the bedroom of the suite slowly opened.

He was still thinking about the picture even as all the men in the room bowed before the king.  And the horror in his heart tore like a dagger.