All in the family: a vote for Hillary Clinton

In the end, it was never even close, and it wasn’t going to be. The Clintons have been a part of my life since I was a pretty young boy. Bill Clinton was my governor for most of my youth. My sister and Chelsea played in the same softball league.

I worked in President Clinton’s White House and Department of Justice for eight years. And that includes a year working for then-First Lady Hillary Clinton at the White House Millennium Council.

Yeah. I voted for Hillary Clinton.

In the end, though, my vote had nothing to do with my loyalty to Bill and Hillary Clinton. It’s true, I wouldn’t be who I am today without the opportunities I had working for them in Washington.

I would love to tell you that I voted based on Secretary Clinton’s impeccable record of service to this nation. She is the most qualified person to seek the presidency in many, many cycles. And so when she is elected, it’s a relief to know our ship of state will be in good hands.

Instead, my vote had everything to do with my daughter.

She is the one who filled out the little oval on the mail ballot.

Not only was 1992 my first campaign, it was the first time I could vote for President of the United States (I was 17 in ’88). I still remember voting for Bill Clinton, the thrill of it, knowing not just that I was voting for my guy, but for my own future. After all, that’s what his campaign had been all about.

President George H. W. Bush was out to lunch. He didn’t even know what a grocery scanner was! Clinton was for middle class families, just like mine. I was voting for my future.

This year, it’s not really about my future. It is about Emeline and Finnegan, their future, their country, their world.

It would be easy to pivot from there and bash Donald Trump, but what’s the point. We all already know all the crazy stuff he’s said and done. We know just how screwed our nation would be should he be elected president.

Yeah, I am proud that I have a close connection to the next president. That’s great. But that is not what excites me.

I am excited about the future, the future for my kids, and for everyone. 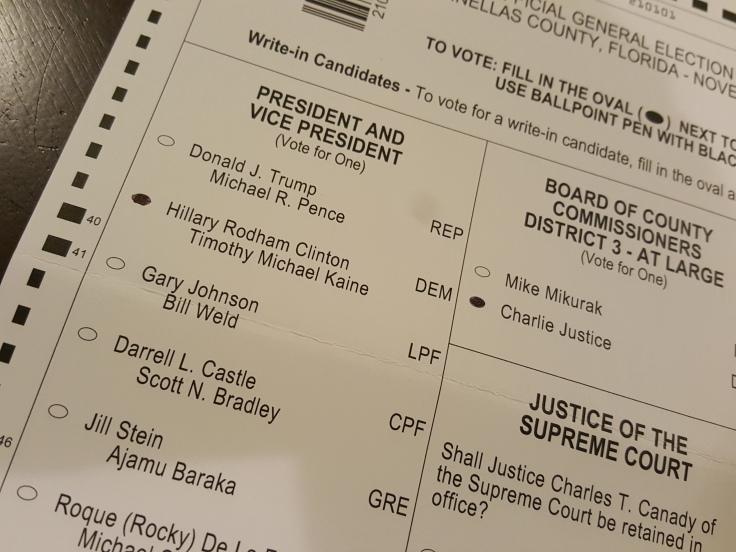