These books were more than just entertaining for me. They were the first reference books to my imagination I ever had, touchstones to entirely new worlds and new ways of thinking.

I did not grow up in a church. Formal church services still feel uncomfortable to me, strange and foreign. Though I can appreciate the sentiment of love and inclusion and social justice ministered at the church services I have been to (and especially the message of the Unitarian Universalist Church, where I have taken the kids several times), I usually feel lost among the uniform, repetitive reverence where so many others find comfort.

Maybe this is why I found — and continue to find — the idea of a god born of the fire and ice of the early universe, and then himself giving birth to the first Gods of Norse Mythology, not so far out.

We bought Emeline a book for Christmas, the National Geographic Treasury of Norse Mythology (not sure why I didn’t go with D’Aulaire’s, and may still; they have a book on Greek Myths as well).

Honestly, I wasn’t sure how it would go with Emmy. While the artwork is beautiful, it is sparse, and a little esoteric. But I shouldn’t have worried. Emeline asks a lot of questions about her world, the universe, how the world was made, God, and the nature of the cosmos and her terrestrial world.

We devoured this book. Each night with me, we read a chapter. They’re relatively short, four or five pages, and so each story is just long enough for a before-bedtime read.

The National Geographic people do a good job of writing it for a younger audience as well. After all the Norse Gods and Giants that inhabited that world were violent and pretty disgusting. You don’t need to worry about some of the nastier episodes in the Norse World.

Finn was a little young for it (he’s four, almost five), and tended to ignore the stories or fall asleep when we read them. But even he came around by the end, talking about his favorite gods (Odin), and his least favorite (Loki).

Did this book fire their imagination like the magical kilns of the dwarf underworld? I don’t know, but I really hope so.

It’s a big, beautiful book, and I am sure we’ll come back to it again. I can’t wait. 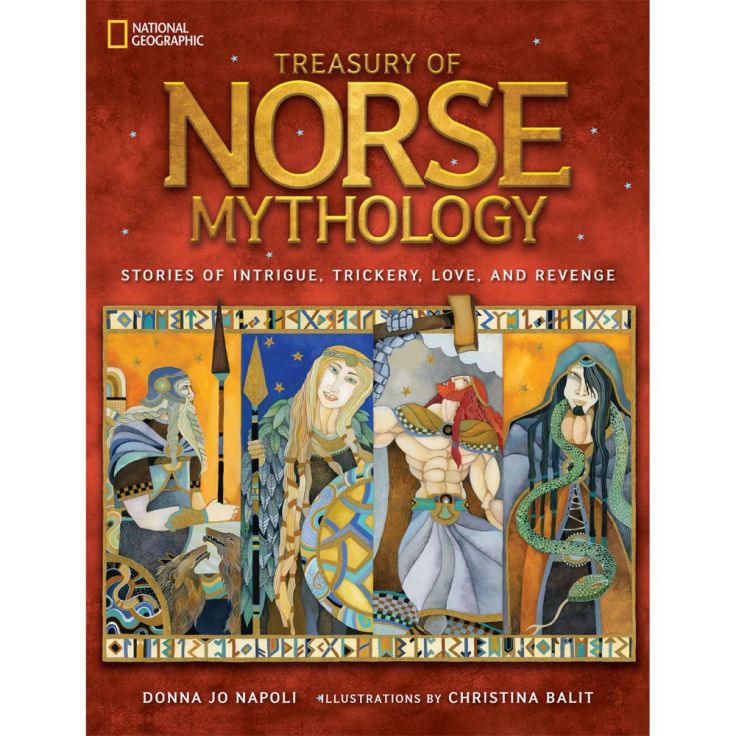