The Order of the Cerberus 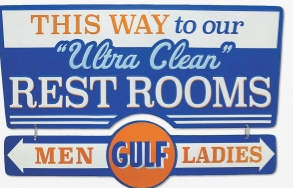 This was originally for a flash fiction challenge on heroism, but the word count went wrong, and it didn’t feel right. Still, I liked what I had — sort of the base material — so I thought I’d share. Enjoy.

Sun’ll be up in a few hours. That’s another day in this shithole.

Wonder if anyone will come by. Prob’ly won’t. Kinda meant to be that way, I guess.

Who wants one a’ tha’ gates a’ Hell where just any asshole can find it?

I mean, I could pull over, go in a bush…

Nah, Carl, come on. The minute you do, there’ll be five-oh all over you. Pants unzipped, johnson in your hand. You wanna spend the night in wherever-in-the-hell-I-am jail? Fuck that.

Just take a leak, just splash some water on my face, I can get another few hundred miles down, I just know it.

I remember my first day.

Life might ‘a turned out a little blurry, but he’s crystal clear. Stays that way. Guess he always will.

“You’re dead, Gabriel. You know that?”

Felt like coming to after having my bell rung by a prizefighter, somethin’ I know a little bit about.

“Unnnhh,” I rubbed my head, looked up. The scene was nice, beautiful, even. More beautiful than I’d ever seen. Some of the hot shots I worked for, they liked the best of the best.

Not that I ever got a taste of it. Always left me out by the car, standing at some gate, out in a hallway. Never got inside much.

“I know it feels a little odd, Gabriel. But you’ll get used to it. Do you… know who I am?”

The man sitting across from me was dressed to the nines. Good lookin’ fella, dark hair, perfect white smile, clean shaven.

I dunno how I knew, but I just knew: he was the Devil. Lord a’ Darkness. Satan. It just sorta… came to me. I fished around for a cigarette.

“That’s right, Gabriel,” he said, smiling. Here, take one of mine. He leaned across the dark stained wood table and handed me a cigarette from a silver case, lit it with a silver Zippo. Best damn cigarette I ever smoked.

“So, what now. I gotta go sit in a pit a’ fire? Get whipped for eternity? Eat shit? Somethin’ awful like that?”

The man across from the table — the Devil — laughed.

“That’s right. It’s what you do now. Your reward may someday be purgatory. If you do the job, and do it well.”

The Devil smiled, but it wasn’t funny. Just leaned back and held his fingertips together.

“Pit of fire. Whipped for eternity. Eat shit. Or, you know,” his smile disappeared like smoke in the wind. “Your worst fears, the thing you dread most. Whatever. I’ll come up with something. It is… what I do.”

I swear, I’m just going to pull over the side of the road. It’s the safe thing to do. I’m tired! Too tired to drive! So what if they take me to jail. Least they have a toilet.

No. I can’t afford to go to jail. Not now. Things are just starting to turn around…

“You’ll need this.” The handsome bastard leaned over and grabbed my forearm. It burned and smoked for a second. I tried ta’ hide the pain.

When he pulled his hand back there was a tattoo on the inside of my forearm.

Young kid came in once, and before he turned and ran screaming, he dropped his high school Latin book out of his backpack, so I know some of the words.

Order of the Cerberus. Just like that three-headed dog, guards tha’ gates of hell.

This place? A gate to hell?

I fucken’ believe it.

Oh, thank God. Thank God! Thank you, God! This is a fucking miracle.

Alright. I’ll get the gas, run to the bathroom, buy some Red Bulls.

Christ, I can’t wait to get in that bathroom.

Next thing I know I was sittin’ in this shit-covered stall. There’s two of ‘em, and they’re both covered in shit and vomit and I don’t know what else. The one urinal has a “broken” sign on it. I’ve never tried it. Turns out when you’re dead, you don’t have to pee or anything. Don’t eat, either.

Sinks run water, but the counter is so filthy you don’t want to touch it. There’s all kindsa graffiti all over the walls, profanity, pictures. The floor is tile, but is mostly covered in grime and grit and dirt.

I get to smoke in here, that’s nice. Never seem to run out of cigarettes in my pack. Lighter always works.

The place, though, isn’t as bad as the noises I can hear on the other side of the wall in the first stall. I wouldn’t admit this to just anyone but the things I hear, well, it would give me nightmares. If I slept.

I mostly sit on the counter and smoke cigarettes and avoid looking in the dirty mirror.

Mostly ‘cause there ain’t a reflection of me in it.

I hear the door creak and I pull the gun.

Devil told me to shoot anyone who came in here. Shoot ’em an’ take their soul to the first stall.

This is literally the worst gas station I’ve ever been to. You can smell the bathrooms from the other side of the pumps.

Maybe I should wait…

Stupid. Shoot whoever comes in there. Then what? Give ‘em to the Devil? Just for coming in a goddam bathroom?

I don’t think so.

Shoot them, he told me. Take their soul to the other side of the gate, he said. They come in this bathroom? They ain’t livin’ a good enough life out in the world, anyways. Take their soul, he said.

What do I do? I keep them away from the gate to hell. Ain’t hard when you look like me, I figure. More’n a dozen souls I sent back out inta’ tha’ world, ‘stead ‘a given ‘em to the Devil.

Hero? Nah. I don’ think so. Devil never came back lookin’ for any souls, so I figure I’m just sending folks back to maybe clean their lives up before they die, maybe give ‘em a second chance. Don’t think that makes me no hero.

I wonder sometimes, though. Is my job really stealin’ souls from this life to give to the Devil?

Or is it to keep hell from getting out?