Richard Ben Cramer’s ‘What It Takes’

It feels a little silly, a little trite, as the 2016 election winds down, to say that presidential campaigns are flat-out ridiculous. Certainly no previous presidential election has ever been any more ridiculous than this one. After all, there is a stark raving madman running amok on the trail, threatening to build a wall on the southern border, banning people of the Muslim faith from entering the country, mocking a disabled reporter, encouraging violence against numerous members of the media, assaulting women, threatening to jail his opponent, or whatever egregious, monstrous, un-American thing he has done in the last few hours.

And that’s just the Republican nominee. Trump, the Republican horror-show fiasco, is running against the first woman in history to secure a major party nomination for President of the United States. Kind of a big deal.

Richard Ben Cramer, the author of What It Takes, couldn’t have foreseen the rise of Hillary Clinton in the late 1980s. There  are some lines towards the back of the book about “…the man” we entrust with the Office of the Presidency. All of which is to say: we have come a long way since 1988.

Cramer died of lung cancer in 2013. But I would have liked to have asked him his thoughts not just on the obvious, big differences between then and now, but on what’s remained the same. And he would be the guy to ask, because What It Takes is the unquestioned go-to book about politics and campaigns.

What It Takes covers the 1988 primary campaign on the Republican and Democratic side. I don’t know any other way to put this: read this book. Whether you’re one of my political friends or not. Read this book.

It may seem like the 2016 campaign is insane. And in a lot of ways it certainly is. No question. But 1988 was pretty wild, too. The things these candidates did in pursuit of their party’s nomination for president are things that most of us could never consider, never fathom.

I started in politics in 1992, the campaign of which got just a couple of passing mentions in a follow-up Cramer wrote and published in the back of the book later.

These days, I’m usually one of the old guys in the room. 1992 seems like forever ago, and I guess maybe it was. But there is no denying it was the beginning of a new era of politics. Just watch The War Room, the documentary on then-Governor Clinton’s sometimes-improbable presidential campaign (and watch for a quick glimpse of the back of my head in one of the crowd scenes) to see why. James Carville explained it then on Election Day:

We changed the way campaigns are run. It used to be, there was a hierarchy. If you were on one floor, get to another floor. Everybody was compartmentalized. You people showed that you can be trusted. Everybody in this room, everybody.

But if 1992 was the beginning of a new era in politics and campaigns (an era defined by data analysis, rapid response and micro-targeting, perfected by the Obama folks), then 1988 was the end of an era.

You are not going to find a better, more detailed (1,047 pages) accounting of the end of that era than What It Takes: The Way to the White House.

To say it is “detailed” sounds trite, too. There just isn’t a word for it. The research that went into this book must nearly be unparalleled. We’re talking not just about the early years of George H.W. Bush, but his parents, too. And Bob Dole’s family. And insight and detail about the Dukakis family and the Gephardt family.

Joe Biden — now the Vice President, and believe me, that’s on your mind with every page about Biden — lost his first wife and his daughter in a horrible car accident. You can (to borrow Bill Clinton’s phrase) feel his pain. You can certainly feel that Cramer felt it, understood it deeply.

Bob Dole was horribly wounded in World War II. His road to recovery took many months. Years, really. Cramer makes you suffer along with him as you go chapter by agonizing chapter.

Through the suffering of all of these candidates, through their unique pain, you begin to understand them as people, as human, not just as politicians. And that’s what makes this book so special.

Political books like this aren’t written anymore. One of the wonders of this great book is the level of detail with which Cramer chronicles the rise of each of the candidates he covers: George H. W. Bush, Bob Dole, Richard Gephardt, Joe Biden, Michael Dukakis, and Gary Hart. I don’t think journalists can get this close for long enough to candidates — certainly not presidential candidates — anymore. It’s just not done.

It is a shame, and it is a loss for our country and our politics. Because if ever there was an election were the characters who ran for the nation’s highest office might keep us entertained for a long, long time, it is this strange one. 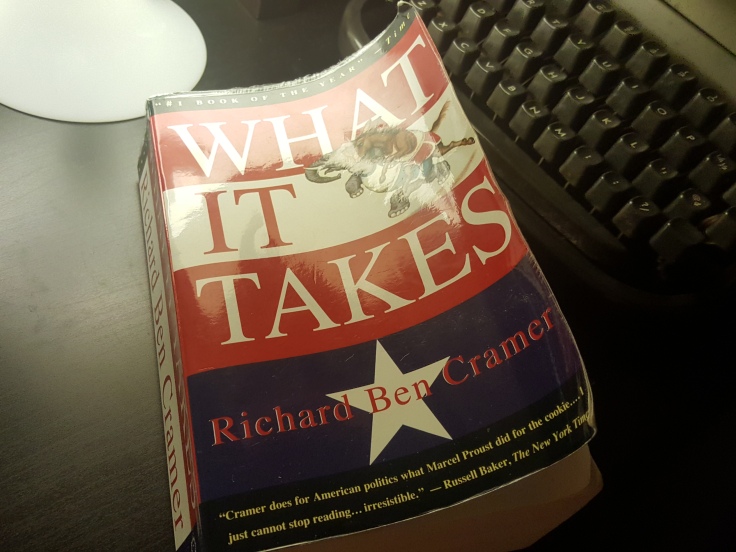