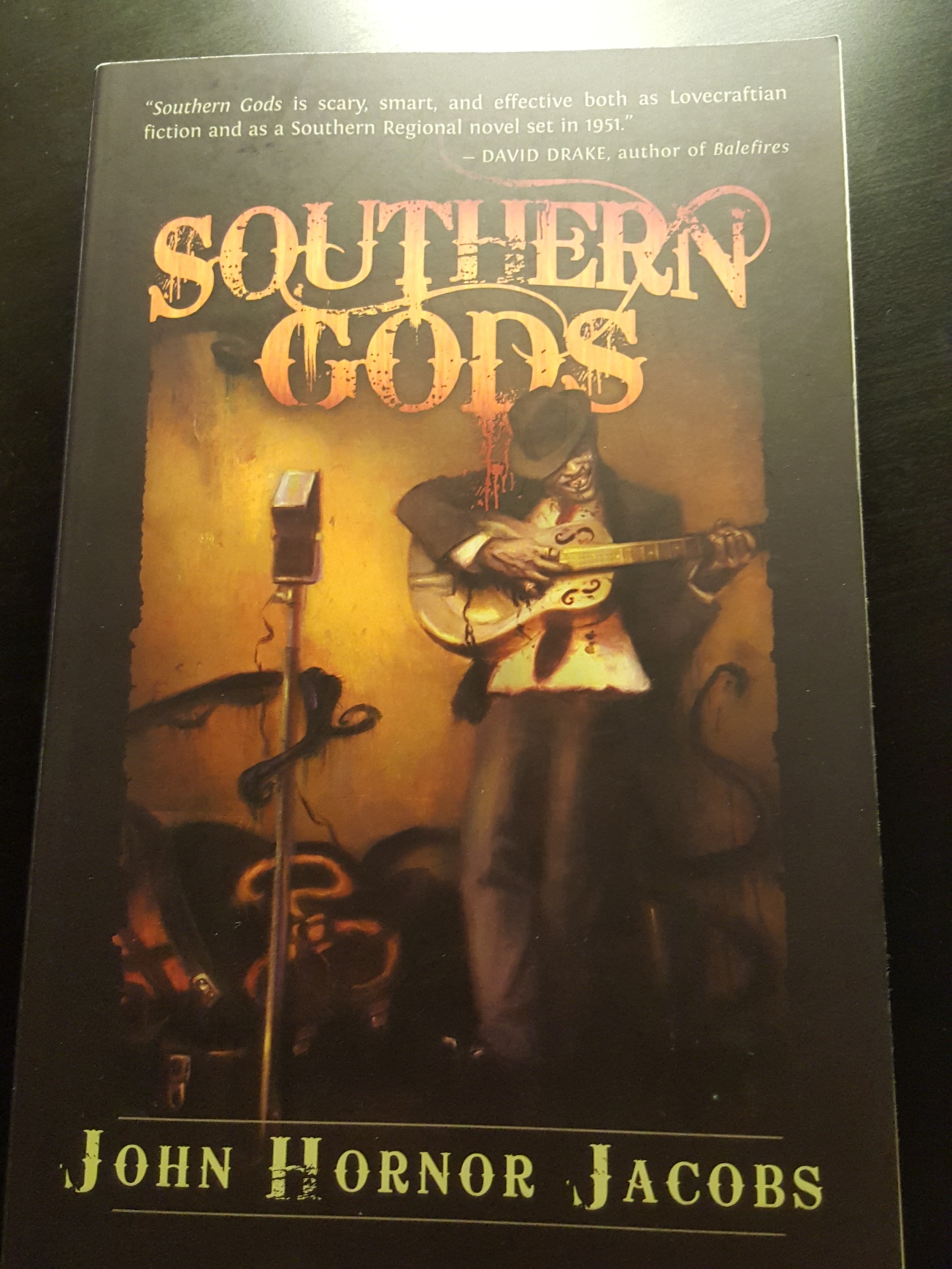 I should start this post by saying I went to high school with John Hornor Jacobs. We graduated together, 1989, from Little Rock Central High. I’m not sure our having gone to high school together will affect my review of his first book, Southern Gods, and if it does, well, too damn bad. I’m not here to rip on books — I like them too much to do that, anyway.

A little more on the back-story of Southern Gods: I didn’t know it was a NaNoWriMo story. So it’s appropriate, here at the tail end of NaNoWriMo, maybe, to review it.

I liked this book. It was fun to read, and as a guy who writes his own stories (and is, in fact, at his own end of an informal-ish NaNoWriMo project), it was fun to see how he put it together.

Last couple of back-story pieces: it takes place in Arkansas, my mostly-home state. (I always say “mostly-home,” because it matters where you’re born — more so in the South — and I was born in North Carolina, moved to Arkansas when I was a baby. But there are people there who don’t think I have a claim to Arkansas, and who can say, maybe I don’t. I spent a dozen years in northern Virginia and Washington, D.C., and have spent the last ten, almost a quarter of my life, in Florida.) My family is in Arkansas, I get back when I can. I miss it, I miss the country places, like where my folks live now, a pond, several acres of woods all to themselves. I miss the old, out of the way places my great-uncle used to take me to fish. I miss a lot about it, and Southern Gods, despite the well-presented creepy horror (or maybe because of it a little bit), reminded me of home.

There’s nothing like finding an Easter Egg in a video game or a movie, and that feeling is exponentially larger when you find one in a book. John decided to give our high school Latin teacher a shout-out, an entirely minor mention, but certainly noticeable, especially to those of us who couldn’t hack high school Latin. Failing Latin class is no fun, but reading a book and feeling like you’re part of an elite club is always a good thing.

The book itself is a solid, quick read. Though, like I said, I like books and will read pretty much anything, I am not one to usually pick up a horror novel. (Which is weird because as a kid, I was hooked on Stephen King. Couldn’t get enough.) Good character development — when you get to the last pages, you get that sinking feeling like you’ve got to say goodbye. Come on, man, I don’t want these people to go away…

I am always impressed when writers can channel a different time. Southern Gods is post-World War II, not too long after, I guess, early ’50s. That’s real work, that takes effort. I like to write stories that take place either now, present day, or not too long ago. Sure, it’s hard to capture a place and a time and a world no matter where it is. But rural Arkansas in the early 1950s is something special.

John’s got some other books out there, and I’ll check them out for sure. I hope you do, too.